HOW DOES CHERY ENSURE THE EXCELLENT PERFORMANCE AND WORLD-CLASS QUALITY OF ITS CARS?

High temperature tests aim to check overall operation state of the cars at high temperatures. As the functional assessment on non-metallic parts, chrome-plated exterior trim parts and relevant parts varies with temperature, it is necessary to design more high-temperature drive cycle scenarios for sunlight exposure tests of vehicles. Riyadh is located in the desert of central Saudi Arabia, with the highest temperature above 55°C in summer, making it an excellent test site in the world. In order to better meet local road conditions, Chery cars were specially filled with 91 grade gasoline from Saudi Arabia to examine the difference in gasoline products at high temperatures.

When exposed to the high temperature above 55°C, Chery cars passed the high temperature resistance test of electronic components. The cars continuously run for 4h under direct sunlight at high temperatures close to the boiling point. By this way, local extreme environmental data were obtained, and engines attained stronger adaptability to various scenes by controlling the intake air temperature.

Chery cars gallop on the Tibetan Plateau, the roof of the world

The Tibetan Plateau in China is the highest plateau in the world. Golmud, Qinghai Province, China, was chosen as the plateau test site for Chery cars. This region features a typical plateau continental climate, various complicated road conditions such as snow-capped mountain, gobi and tidal flat, and of course the common concern on "altitude stress".

In the plateau test, every day, Chery cars traveled hundreds of kilometers on the plateau with an average altitude of over 4,500 m. When travelling through 20° steep slopes at an altitude of 4,700 m in Kunlun Mountains, the cars all performed well, and smoothly passed the plateau tests at uphill/downhill slope and half/full load. The cars performed almost the same as on plains, ensuring that consumers have the same driving experience on plateau areas as on plains. 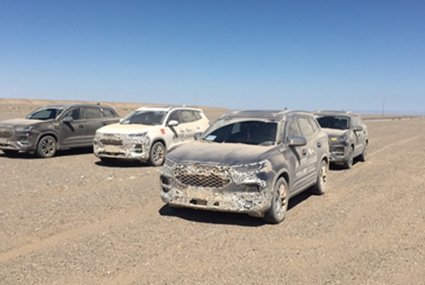 Chery has always regarded quality as the foundation for its survival; otherwise, it will lose the essential qualification to survive in the automobile industry. With this philosophy in mind, when entering each overseas market, Chery will conduct rigorous tests according to local special climate, temperature difference, road conditions, individualized needs of consumers, etc. Besides the extremely hot desert in the Middle East, Chery cars have also withstood the extreme cold in Siberia, Russia, and severe challenges in the South American Plateau, and have become truly world-class models.

Chery is also China's first automaker to export vehicles, CKD parts, engines and vehicle manufacturing technologies and equipment to foreign countries. Up to now, Chery has exported vehicles to more than 80 countries, established 10 overseas factories and more than 1,500 overseas distributor and service outlets, and has 9.5 million users around the world in total. Especially, Chery has ranked first in China's passenger car exports for 18 consecutive years.